Ready to see the world in first class simply by collecting points and miles? Want to take that epic adventure you always dreamed of?
Take the Leap! Start Here.

Frequent Traveler University is heading to the city that never sleeps… Las Vegas! Join us at The D Las Vegas from April 29th-May 1st, 2016 for the first ever FTU Signature Event. We will have amazing educational sessions including beginner and advanced sessions, great networking, and plenty of fun! Learn how to earn elite status quickly, book cheaper tick

ets, find the best redemptions, and navigate the world of miles and points. New this year will be aspecial full day add-on of Manufactured Spending where you will learn the tricks to generating miles, points and how to achieve credit card spend on the cheap from leading experts in the field.

Rewards programs don’t have to be complicated. Get the inside knowledge you need to make these schemes work for you. At this FTU Signature Event there will be sessions aimed at both beginners as well as more intense advanced FTU sessions. Whether this is your first FTU, or even if you have attended multiple events before there will be topics presented for all knowledge levels.

Interesting graphic from YouGov on American’s feelings on flying in an airplane: 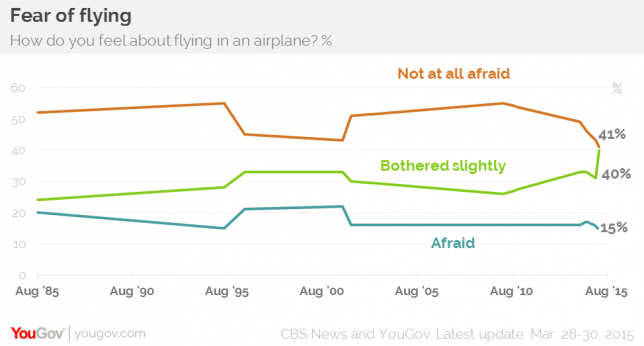 What’s interesting to me is the precipitous drop in not afraid to fly and significant rise in afraid to fly after the Germanwings crash. Are people that much more afraid after an intentional event rather than an unintentional accident?

Plane crashes are rarer than ever, but due to the very nature of flying, some will always have uneasy feelings towards it.

The Economist on a recently patented airline seat:

…if the conditions are desperate enough, it is possible to sleep while slouching forward in one’s seat. That fact hasn’t escaped Boeing. GeekWire has noticed that last year the airline manufacturer patented something it called a “transport vehicle upright sleep support system”, although GW gives it the rather more pleasant name of a “cuddle chair”. The idea is that fliers can attach a tray to their seats which can be angled away from their laps (see picture below). It includes a rest for a face, a bit like one would find on a massage table. Although it looks a little like a medieval torture device, blissful sleep surely ensues.

Interesting article from Mashable on the amount of change that we leave with TSA every year:

The unclaimed money — usually coins — is sent to the TSA financial office. Congress gave TSA the authority to use the money for its operations in 2005.

Writing for Mashable, Airline Captain, Chris Manno, on why remotely piloted airliners are not the solution to aircraft accidents

…as an airline captain, I can’t picture an airliner completely reliant on ground-based guidance, data and analysis.

Any remote-control solution hinges on a futuristic technical perfection, and there’s the rub: Today’s remotely piloted vehicle technology has so far chalked up an accident rate nearly 40% higher than that of airliners with pilots on board.

40% seems a bit high to me, but even if that’s true, I’m not sure the technology is there to even do this. Sure autopilot takes over as soon as you’re in the air, but landing and takeoff still requires quite a bit of calculation and judgment that I’m not sure we’re ready for technology to be handling, yet.

As a followup to the post on how airborne WiFi works, Vox has why Southwest’s Internet is faster (and cheaper) than everyone else:

Southwest’s wifi is provided by a company called Row 44. Instead of towers, the signal is sent up from a handful of base stations to a network of geostationary satellites (the same kind used for satellite TV services). These satellites send a signal over the Ku frequency band to a much larger, more complex antenna on top of the plane.

Row 44’s service isn’t nearly as fast as what you’d get on the ground, but it’s better than Gogo’s. Row 44 doesn’t advertise specific numbers, but it’s estimated to have download speeds between 1 and 5 Mbps per user. It’s also cheaper: Southwest charges a flat fee of $8 per day.

The New York Times on the current state of airplane seat swapping:

Turf wars over the limited real estate in a plane cabin, from the overhead bins to the armrests, have become more acute in recent years. And with airlines packing planes tighter and charging more for exit rows, for seats further up in the economy cabin or for seat selection at the time of booking, requests — or demands — to swap seats have taken on a new tenor.

I’m probably on 30 or so flights per year, but I don’t ever seem to have this problem. This could be related to the number of flights I take on Southwest (which has open seating), but even when I fly other airlines, I only catch a whiff of it now and then.

That being said, who’s really to blame in this? Airlines have continually attempted to stratify they’re seating; charging more for what are considered premium seats, despite the fact that sometimes the only added benefit is the location on the plane. I tend to agree that you just sit where you’re assigned, but perhaps if airlines moved away from upcharging every single thing they could, people wouldn’t be so touchy on trading one seat for another.

Click on over for a great video from FiveThirtyEight and ESPN films “Collectors” series on how to be funny.

It’s interesting to me that Peter McGraw (the subject of the film) traveled the world to find universal properties of humor. Are there things that are inherently funny to people apart from how we view things in our culture? If so, wouldn’t traveling and meeting more people help you begin to better understand those things and make you funnier?

For Vox, Joseph Stromberg on how the processes we have for luggage are one of the biggest inefficiencies of airline travel:

Engineers have devised a system for getting our bags into and out of the cargo holds of planes quickly, using codes, scanners, conveyor belts, vehicles, and people whose job is entirely focused on handling baggage. Yes, bags get lost sometimes. But the two-tiered charging structure means that instead of using this system, we’re cramming a whole lot of luggage through a parallel system meant to put people on planes, causing all sorts of inefficiencies and delays.

That’s such a great way to put it. We’ve devised an efficient system (checking luggage), but instead, airlines are incentivizing people to bring luggage through a system that was not devised for baggage (going through security and carry ons).

How do we solve for this?

The way to solve this is to decouple the cost of tickets from the cost of bags. If all your bags were weighed before each flight and you were charged accordingly, you’d have the option of flying cheaper by packing lighter, and the people who carry a ton of baggage have to pay the full cost of it.

That’s an interesting solution, but the infrastructure, not to mention training passengers, to do that would be enormous. Plus, in addition to the fact that there would be no way to know the final cost of your flight until after you’re at the airport, the inefficiencies in boarding would now be transferred to the checkin desk, as that everyone would have to go there before security.