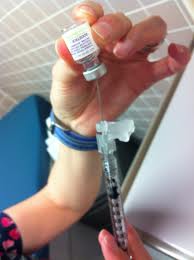 I’m not the biggest fan of going to the doctor. It’s not that I’m particularly afraid of something being wrong; I honestly want to know if something is. It’s more that I don’t really like to be told what I’m doing wrong when I already know I’m doing things wrong. One more step on the ladder to self-actualization, I guess.

Because of that, immunizations are one of the things that was really easy to put off. Here we are a month out from the trip and I still hadn’t gotten any of the medicines I needed for the trip.

This may seem like an easy step that could be skipped: don’t have sex with locals, don’t eat suspicious food, and don’t drink the water and you should be covered, right? While honestly, those are good ways to mitigate something going wrong, there’s actual codified reasons for going. Namely that you simply can’t get a visa to certain countries without proving immunization.

My group of doctors luckily had specific travel appointments. It wasn’t covered by insurance, but they could write prescriptions for everything I needed and make suggestions on how to find the rest. Plus, since this doctor specialized in travel immunizations, she could better suggest cheaper generics that would work just as well and would be covered by my insurance. Your doctor may not have something like this, but if you’re going on any trip, it’s definitely worth asking.

For the stops on our trip, I was pretty well covered with getting five things: Hepatitis A, Hepatitis B1, Typhoid, Malaria2, and Yellow Fever. While all are suggested for traveling to the places I’m going, the only actual requirement was Yellow Fever to get into/out of Madagascar. There were a couple that were also suggested, especially if you plan on coming in contact with livestock, but I’ve learned my lesson in that arena.3

Immunizations may seem like something you can put off, but it’s kind of important to do this at least a month before you trip. The CDC has a great resource for determining what you need. Some of the medicines require you to take it before you go, in addition to while you’re there. So you want to make sure you give yourself plenty of time to get all of that sorted out. Don’t be like me, be proactive in this. It didn’t end up hurting my trip, but it really could have derailed the whole thing.