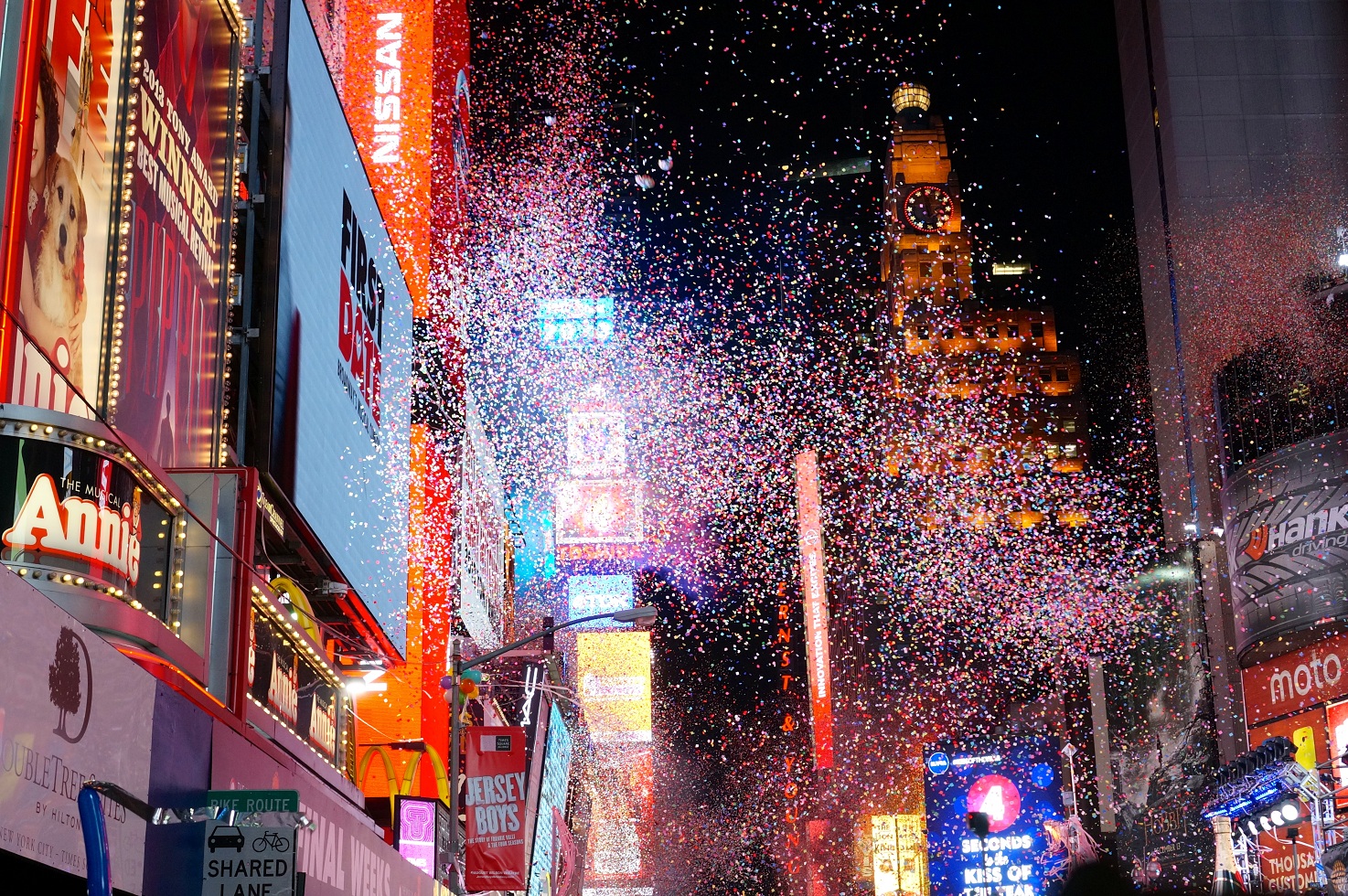 Times Square for New Year’s is just as you imagine it: decadent, depraved, and dependent on a buzz that quickly degrades to a hangover shortly after midnight. There’s something about being there, something about the skyscrapers on either side of you and the throngs of people pushing you in every direction. I’ve been a lot of places and seen a lot of things, but at its pinnacle, the energy and anticipation of a new year in that venue has never been topped.

What may surprise you is that it’s a fairly orderly affair. (Almost) anyone who wants to be in Times Square for the ball drop needs to be there by about 4pm. NYPD sets up cattle corrals (no, really) and seals off entrances around that time. Everyone has to go through a metal detector and no one is allowed to leave until after midnight. That means if you want to see the ball drop, you’re going to go over eight hours without being able to go to the bathroom or get any food.

As you can imagine, that’s not the most pleasant of experiences.

Both times I’ve been lucky enough to have atypical experiences, ones that I can’t really complain about (but that doesn’t mean I won’t!). The first time (in 2011), I met this guy, Mike Turner, (yes, the same one who’s going round the world with me) at a party about two weeks before New Year’s. He asked if I wanted to tag along with a group of about 15 people he’d put together. They had two rooms at the DoubleTree Suites right in Times Square.

This time was a bit more of an ordeal. With Hilton’s recent devaluation of its Hhonors program, the price of rooms ballooned to 95,000 points per night. (before the devaluation, you could have stayed four nights at the DoubleTree Suites in Times Square for 140,000 points) Mike and our friend Jason Burrows had already committed to going, so they’d picked up two rooms fairly early in 2013. But as December 31st grew closer and the peer pressure to go grew stronger, Julie and I got sucked into the gravitational pull of the force of nature known as a Mike Turner (and Jason Burrows) trip. I had 95,000 Hilton points, they had about 30 people who wanted to go, so between the three of us, we booked five rooms at the DoubleTree Suites right in Times Square.

That may sound like a lot of people for just five rooms, but honestly it’s not as bad as it sounds. Every room is a two-room suite with a pull-out sofa in the living room and we were lucky that our Hilton status could get us (mostly) on the same floor and (mostly) two-bed suites. We ended up being able to put six people in each of the five rooms and (mostly) everyone had some type of bed to sleep on.

If you’re over the age of 25, employed, have friends that are employed, and want to experience New Year’s in Times Square, you’re probably going to want to copy our model. One of the rooms that Jason and Mike sprung for was facing Times Square, so most everyone congregated in that room. We could open the windows, see what was going on, and listen to all the performances without going outside. We could have stayed in that room for the ball drop, but if you’ve made it that far, you’re going to want to try and make it outside.

Going outside sounds easy. It is not. Mainly, there’s the aforementioned NYPD-shutting-down-all-entrances-at–4pm issue. Needless to say, New York police officers are not pushovers. Luckily, neither is Mike Turner. Don’t ask me how he does it, but Mike greased enough wheels to not only gain us entrance into supposedly closed off areas, but also get us in only about 15 minutes before the ball drops. Instead of standing in puddles of urine among swarms of hungover people for eight hours, we pulled right into our ball-watching spots with only a few minutes until midnight.

I’ve posted some pictures below (and you can click through to see the whole set). That’s probably the best way to get a sense of what it’s like. There’s a kind of joyous pandemonium that becomes more palpable with every second that’s counted down.

Is it worth going? I think so, it’s unlike anything I’ve ever done.

Will I be going back?

Never again (until the next time).