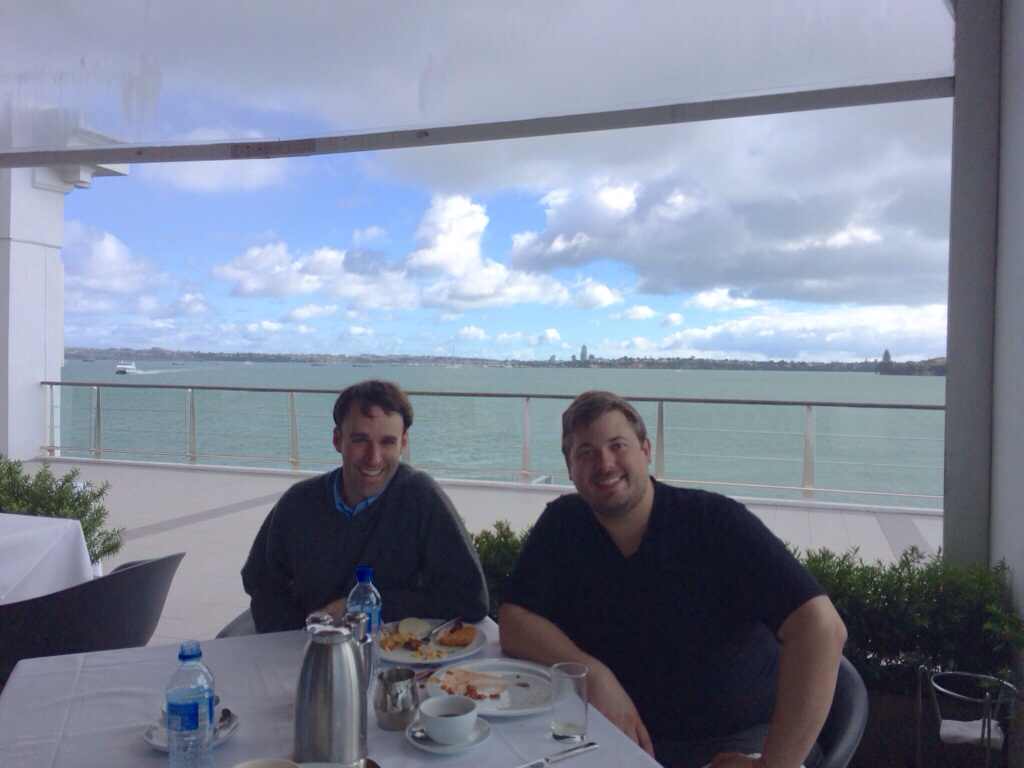 Well, folks: Michael Turner has finally graced New Zealand with his presence. While we’re booked on all our other flights together, the initial ones (Dulles to Seoul to Auckland), we had to book separately because of a lack of award space. Mike rolled into the Hilton Auckland– rental car in tow– and we had a spectacular (free) breakfast right on the harbor, thanks to the Hilton. One of the initial things we disagreed on was how to see New Zealand: my gut said it would be best to rent a car and drive from Auckland to Wellington, but Mike wanted to fly to each city, so that we’d have more time in the major places. After a reversal of opinions (I came around to his idea around the time he was warming up to mine), we decided to rent the car in Auckland and spend our four days driving from the top of the island, down to the bottom.

The bulk of what there is to see on the north island, tends to hover around the middle. New Zealand is known for its extreme sports, geothermic activity, and caves. One of the more famous cave systems, Waitomo Caves, was just a short detour from our trip south. We decided to take a couple of hours and head over to see the system.

We arrived fairly late in the afternoon with very little idea what seeing these caves would involve. We walked into a large open room filled with people from all over the world. The tour operators were busy booking different tours for all the different people there. Mike and I walked in and asked for whichever tour was going off next.

Luckily for us, the Black Water Rafting Co.’s Black Labyrinth tour happened to be the next up. We were ushered downstairs, forced into water-filled wetsuits, lace-up boots, and given very little information what this tour involved. I probably should have been asking more questions about what was going on right around the time they handed us the helmets, but I figured, hey, if they’re handing me a helmet, they have to somewhat concerned about safety, right?

We proceeded to hop on a bus with about ten other people and were driven to the mouth of the cave. I use the term “mouth” very loosely, it was more of a sliver of an opening in the ground with water pouring into it. Mike and I were handed donut-shaped rubber tubes (like the ones you get when you tube down a river or ski slope) and ushered down into the crevice.

The next hour and a half was absolutely spectacular. I think I was expecting something similar to those lazy, beer-filled days on the river during the summer. Instead, we got a mixture of hiking over some fairly rough cave terrain, jumping off waterfalls, and tubing down an underground water system with nothing to light the way but a ceiling full of glowworms and a small LED headlamp attached to the aforementioned helmets. There’s some pictures below from the company’s website (we weren’t about to pay the $50 for the ones from our tour). With the cave tour wrapped up, we drove the rest of the way to Rotorua to meet up with our host for the night. Couch surfing is a service that hooks travelers up with people willing to host them for the night. It gives you an incredible way to not only have a free place to stay for the night, but also spend time with some local folks who love traveling.

Our host was great. We ended up getting in a bit later than we’d wanted, but she was completely flexible. She was a young woman who’d been hosting couch surfers for the past few months as a way to meet new people coming into town. We took her out to her favorite restaurant, Lone Star, and we all enjoyed some beer and steaks. As we ended the day, one thing was abundantly clear: it was absolutely the right call to rent a car and drive across the country. Not only did we get to see a cave system that was located pretty far away from a major city, but also we got to meet a great new person who lived in a spectacular part of the country. Tomorrow we’re going to see more of Rotorua, which has a lot of the geothermal activity in New Zealand.