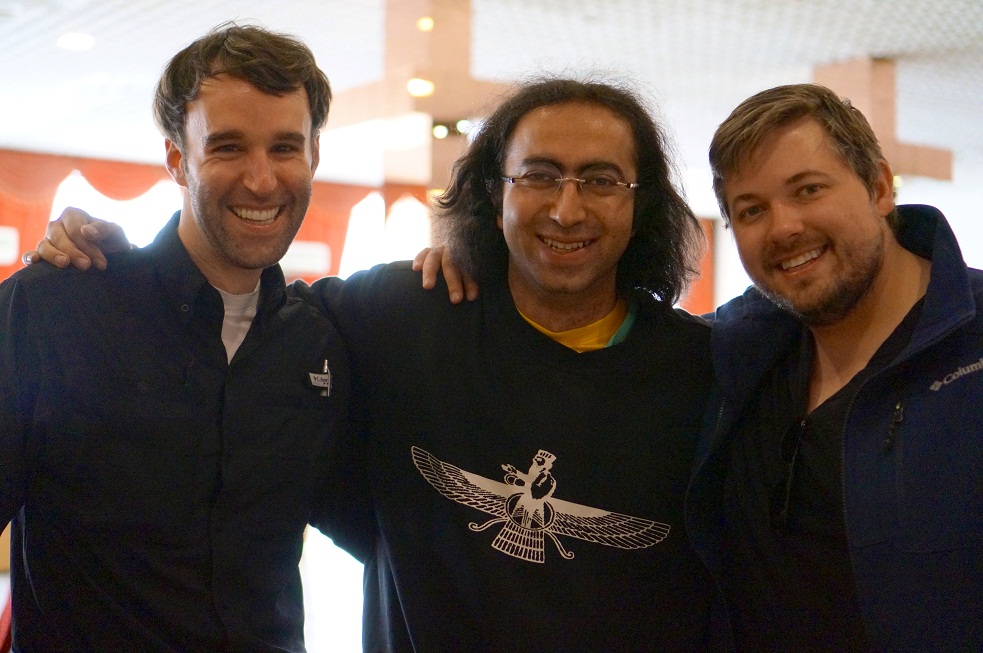 The past couple of days, I’ve talked about how my expectations were completely changed by visiting Iran. That still meant I needed to be alert of my surroundings and what was going on, but could relax into the culture more than I thought I was going to.

This was all made possible by some of the amazing things I saw in my three days there. Much like Buddhism and Bhutan, Islam is integrated into the very fabric of Iran. But where Buddhism was completely foreign to me, there are many elements of Islam that are similar to the Judeo-Christian culture that I’m used to. While a nation integrated with Christianity would be different in practice, it would be much more similar to how Islam is a fundamental foundation of Iran than Buddhism is with Bhutan.

Our time spent in Tehran broke pretty cleanly into three separate days: we saw many of the museums and history on the first day, we had a chance to travel outside of Tehran on the second, and the final day was spent with some of the more cultural aspects of the country.

We spent the majority of the first day looking at the history of the area and pre-revolution aspects of the country. We visited the archeological museum, saw the crown jewels of Iran’s previous monarchs, and viewed some of the glassware and ceramics the country had created throughout its history. All of this was inherently interesting to the history major in me, but perhaps what was most interesting was how little of this had to do with the current regime. After the revolution of 1979, Iran moved from a monarchy to an Islamic theocracy. The assumption of many westerners is that the current rulers have an iron clad hold on society and culture. While there are many clear efforts to erasing some of the more political aspects of the previous forms of government, it’s not been at the expense of the history. The second day happened to be a Monday, when most of the museums were closed. I’d mentioned to the guide that I really enjoyed skiing back in the U.S., so he suggested we get out of the city, see some of the country, and head out to one of the 19 ski resorts in the nation. With only three days in Iran, we weren’t going to get to see Shiraz or Persepolis, so it was good to see something other than the constant sprawl of Tehran. This particular mountain was amazing. I’m used to skiing in the eastern United States, this one was reminiscent of the ones you see elsewhere. No matter how high we went up, the ski area just seemed to expand. While I wasn’t able to get out on the slopes for this trip, going to this ski resort alone makes me want to come back to Iran. The third and final day we had an opportunity to not only see some of the current aspects of the culture, but got to experience some pre-revolution aspects, as well. We visited the palace complex of the pre-revolution kings earlier in the day and saw the grand bazaar and a mosque later in the day. After the history lessons of the first day (and morning of the third day) and the scenic views of the second day, it was interesting to get a better idea of how the Iranian people lived. The one thing that subverted my pre-visit expectations the most was our apparent ability to move about freely within the country. While there were certain things we couldn’t take pictures of and certain places we weren’t allowed to visit, those felt more like the exceptions rather than rules. We couldn’t move absolutely freely, but it sure did feel pretty close to it.

Another thing I’d expected, but was happy to find, was that the Iranian people were very kind and decent. While visiting the tallest tower in Iran, we paused to watch the sun set over the western part of the city. While chatting with our guide, a family sitting near us had opened a package of cookies and brought them over to us. While we didn’t speak the same language, we all bonded over the beautiful scenery and the delicious deserts they offered.

In the markets, I felt someone touch my arm from behind. I turned to see a smiling middle-aged man asking where I was from. I told him I was from the United States and his smile widened. He thanked me for taking the time to come to his home country to see the differences between what was reported and how things actually were. He asked me to please come back anytime I could and gave me many well wishes before I left.

It doesn’t surprise me that individuals are this kind; I honestly believe that most people treat guests this way. But what surprised me was how outspoken and outgoing everyone was about it. They seemed genuinely happy that I was there.

Three days was not enough to see everything nor form a complete picture of the entire country1, but as may be expected, the feelings of the people do not necessarily reflect the policies of the government. Military installations with high barbwire fences and signs forbidding photography line the streets of the city. A giant mural depicting an American flag made of bombs and skulls enveloped the side of a building. Pictures of Obama and some of Iran’s most despised enemies filled giant posters. Nothing ever felt menacing and no direct threats were ever explicitly stated, but it was a sobering reminder of where we were. The third day ended with Mike and I being taken to one of the local billiard halls. In another country, a guide may take you to a bar that locals frequent to give you a sense of culture. With the strict ban on alcohol in Iran, we were taken to play pool. It was one of the places where locals socially gathered on weekends. We were surrounded by some incredible billiards players (including a four-time world champion!) and were kindly, but knowingly given tutorials on how to play. Mike and I joined up on teams and proceeded to spend the next couple of hours laughing and trash-talking with some of the best billiards players in the world. The day ended with our guide taking us back to our hotel amidst loud booms and fires being set around the city. It wasn’t anything nefarious, rather it was in celebration of the new year. The Iranian calendar is centered around the spring equinox; the Sunday-Tuesday we were in the country were some of the last days of the year. This night in particular was the fire festival, which occurs on the last Tuesday of the year. The festival consists of setting off fireworks and making fires around the city. This is done to let the angels know it’s time to bring the spring.

The new year celebration was a perfect ending to our time in Iran. It encapsulated the fears before entering the country, morphing into the joy of experiencing a culture that was legitimately happy to have us there. Any fear of the unknown was quickly swept away by the joyous demeanor of the people.

There’s a lot of things that are worrisome about Iran that I hope I haven’t glossed over in the past few days. There are still very legitimate problems with the government and the way everything is set up there. There’s a reason why I’ve chosen not to dwell on these problems. Not because I want to diminish the seriousness of the issues in play, but because I never heard the side of the story I experienced while in the country. While acknowledging the very deeply ingrained problems of the society, I want to shine a light on the goods things that are also happening there. Those are things that we never hear about.