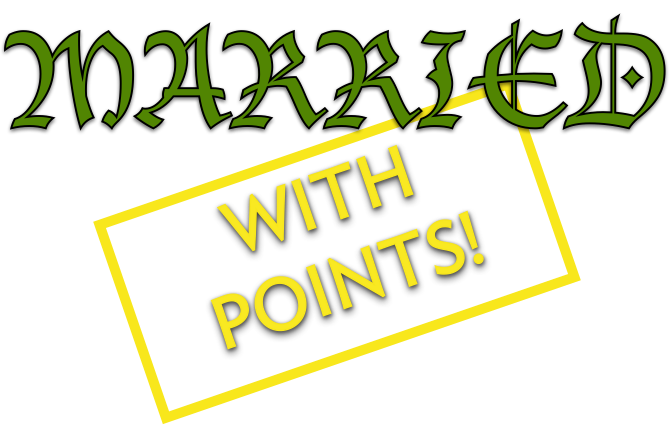 I was never allowed to watch Married…with Children as a kid. Something about the crudeness of the show (and probably the adult themes) struck my parents as a bit inappropriate for ten-year old Jordon. But it was such a cultural touchstone that it was tough to avoid what it was about: a pretty dysfunctional family that despite their best efforts, really cared about each other.

It’s probably a bit weird to start off a series that will detail your own wedding with an example of a show where the marriage barely functioned. But I like the example because pretty much up until that point in television, we saw these idealized versions of marriages1. They didn’t capture the truth that relationships are hard. That they require work. Married…with Children probably took it a bit far, but we needed to see that on television.2

The goal of the Married…with Points! series of posts obviously isn’t to detail mine and Julie’s relationship, but rather how points will play a not-so-small role in everything from the proposal to how we’re planning our wedding to the honeymoon to the actual marriage. If you start early enough and follow the rough outline I’m going to detail here, you can do something similar.

Nowadays the vast majority of us don’t have the money to do big weddings. Julie and I were never interested in having anything lavish, but the reality of our current economic situation is that we couldn’t even if we wanted to. But even small weddings are expensive and if you want to do something out of the ordinary3 you’ve got to be creative. We’re going to try and pay for as much of our wedding as possible with points. Not out of some gimmick to drive page views, but because we have to.

Julie and I are not trying to emulate Al and Peggy Bundy in their marriage. But we recognize that some of the things we want to do are not going to fall into that perfect view of how a wedding should be planned and executed. Married…with Points! is going to be much more similar to Married…with Children than Leave it to Beaver. Get ready for it.