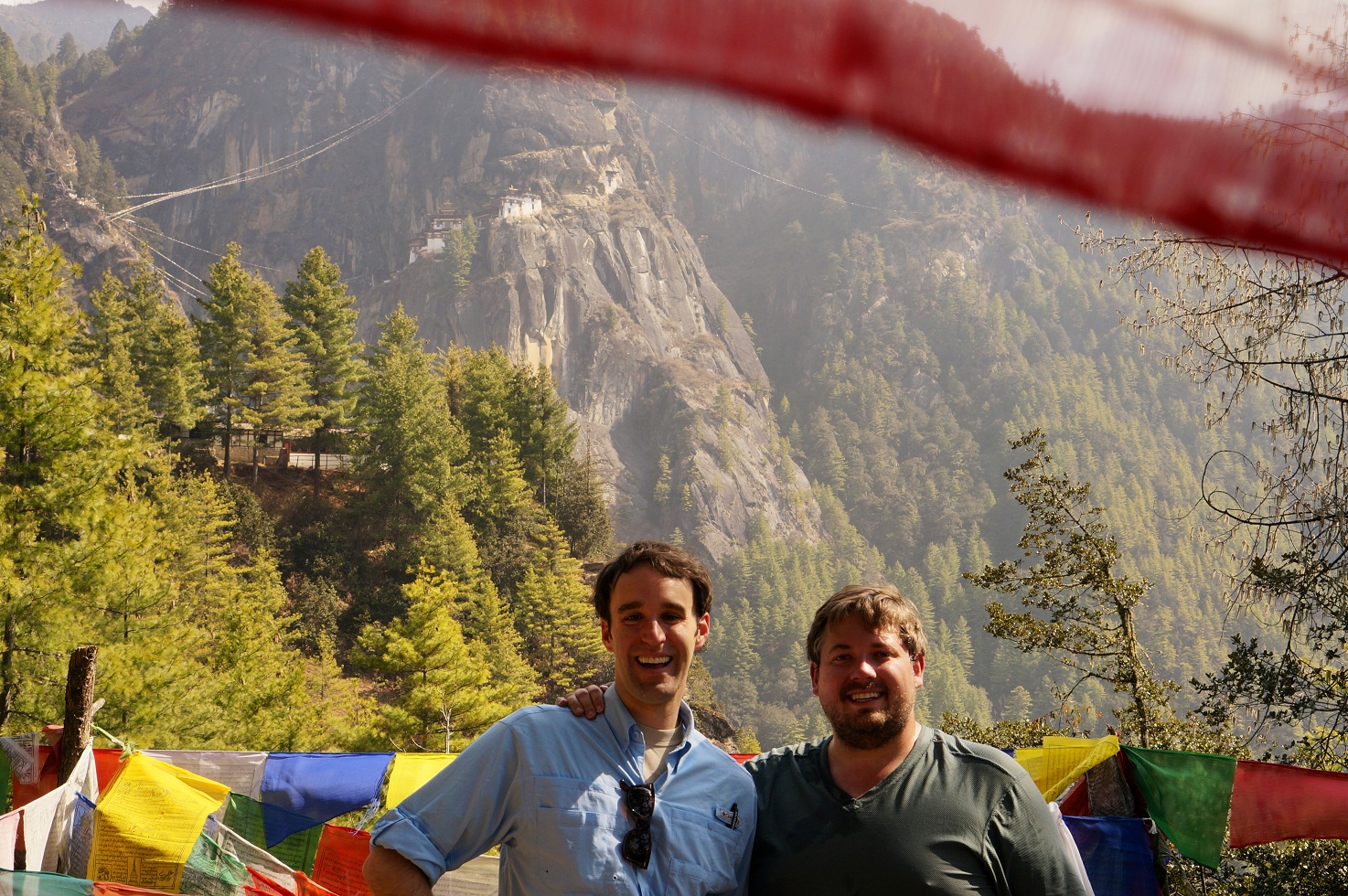 With one major exception, most of what there is to see in Bhutan is centered in Thimpu. But, you’re not going to Bhutan to see things, you’re going to get a sense of a culture that is still firmly rooted in Buddhist traditions. When we made our way to Paro midway through the second day, we did so to see things like the national museum, a school that taught the traditional arts and crafts of the Bhutanese, and a workshop that made the paper for scrolls. But the real goal of our trip to Paro was to a get a sense of the people, a sense of what this culture really means.

We began our final day in Bhutan with a hike up to the Tiger’s Nest; a brutal three-hour climb up a sheer mountain to a temple nestled high on its cliffs. We were ready to collapse by the time we made it to the top, but the monks and other Bhutanese who worship or work at the temple, do it every single day. Not out of a necessity for tourists to see the site, but in dedication to the Buddhas and their gods. With almost as much difficulty, we descended from the mountain and went to visit the oldest temple in Bhutan. Much like the other temples, monks chanted and sang from sun up until sun down. They were happy to let us sit in their temple and showed us how to participate when we could. Much as the monks in the Tiger’s Nest temple, the dedication to their cause was evident. But the monks’ cause doesn’t end with their religion, rather it extends to all people. They were ecstatic to show us the temples and the rituals they do there. Their joy shone through in every demonstration they made and every prayer they offered. Looking out over Paro, it was evident as to why these people were at such peace: they want to be. But as with all things in life, that peace comes wiith a price. In the case of the monks, the price is money and material possessions. People aren’t judged for having material possessions, but there is a definitive line between the monks that have very little and the people who aren’t sworn to that lifestyle. Monks are admired for what they do, but their is definitely a divide between them and the rest of the Bhutanese people.

But what’s emphasized over everything is that no matter which lifestyle you choose, the goal is to be kind to all living things. All actions, all sayings, feed into this mantra. The heart of the Bhutanese people is kindness; if they achieve it, they’re satisfied. 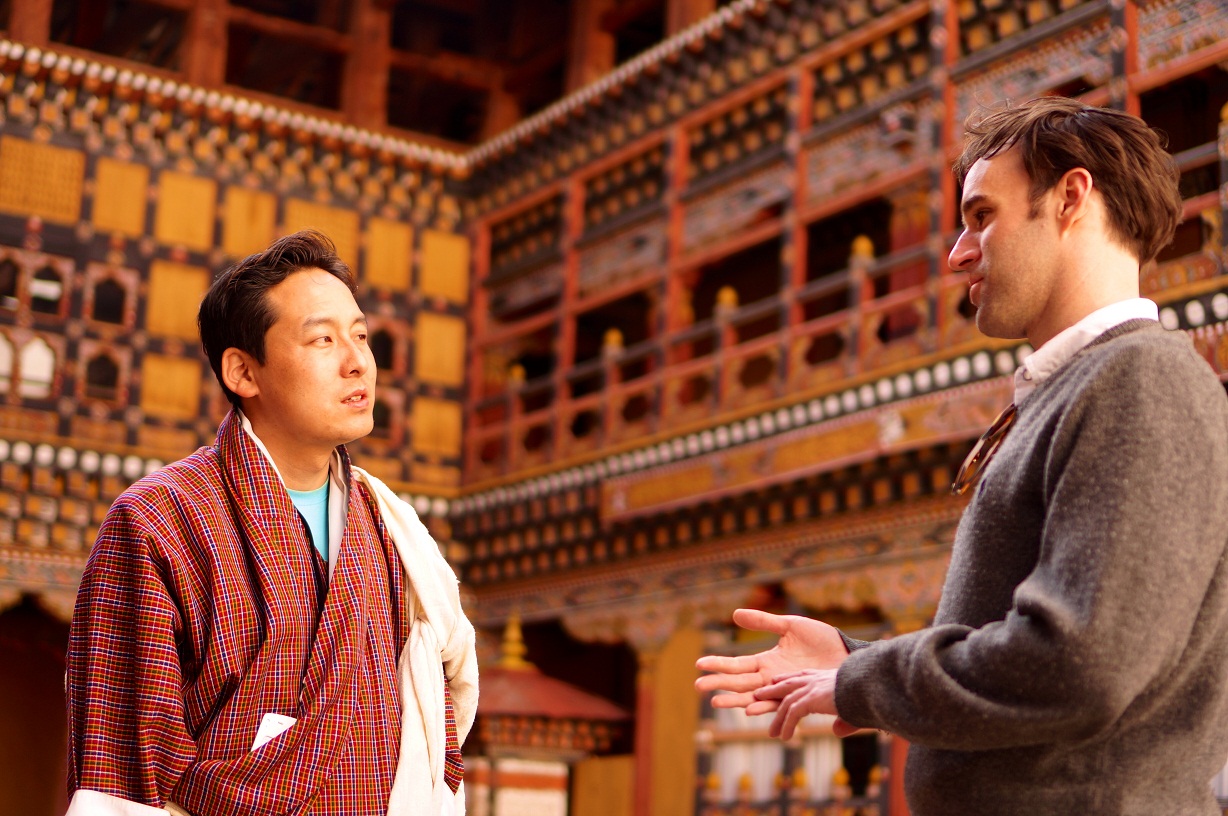 With Kathmandu behind us, Mike and I began what’s probably the most unknown portion of our trip: Bhutan. We’d read about the country in depth, but when explaining our itinerary to people, the destination was met with an inevitable “where?” or “why?”. Throw in the fact that the Bhutanese government charges tourists $250 per day just to be in the country1, and most people were justifiably dubious of this choice of destination.

But the 40-minute flight from Kathamandu to Paro made it immediately obvious as to why we chose Bhutan: spectacular views of the Himalayas–including a crystal-clear viewing of Mt. Everest– and a country nestled into the valleys between the great mountain range. It was the anti-Kathmandu. Where as Nepal let everyone in, Bhutan kept everyone out. Not out of snobbery, but in defense of its culture. Stepping off the plane made this abundantly clear; we breathed in cool, crisp, and (most importantly) fresh mountain air while beeing greeted by a large, welcoming picture of the current king and queen. As we addled off the plane onto the sole runway in the entire country, Bhutan began to envelop you in its reality field; whereas Kathmandu seemed to bend its culture to its tourist, the Bhutanese kindly, but firmly expected tourists to acquiesce to its way of life.

Mike and I met up with our guide and driver, Yeshey and Sangay, as we exited customs. They had a sign and a large, green SUV waiting for us right outside the airport doors. Yeshey informed us that we would be leaving Paro and heading to the capital, Thimpu, for the day, to see the place where not only the king and queen resided, but also the center of Buddhist activity.

Thinking of Bhutan and Buddhism as separate entities is not the most fruitful of activities. All of life in Bhutan is centered around the religion; the whole nation is set up to govern with Buddhist laws. One of the central–and most interesting– tenets of Bhutanese life is Gross National Happiness; in short, its the Bhutanese governments stated goal to provide happiness to all of its people. Mike and I came to the country with a very western definition of what happiness meant, but the essence of GNH is providing, clothing, food, and shelter for all people; GNH is a codified version of the stated Buddhist goal.

As we continued through Thimpu, this was immediately evident; stupas and prayer wheels–the equivalent of churches and altars– lined the city. We were fortunate to visit one of the most popular stupas in the middle of the day. People flocked around it, circling the dome in a clockwise motion, while chanting mantras to their gods. Mike and I joined in the walk and was quickly subsumed by the forward-marching crowd. To the sides of the stupa were prayer wheels of all sizes. For those unable to walk or for those who preferred, they could spin the prayer wheels in a clockwise motion. Inside the wheel was a mantra written on a scroll. This held the approximate same effect as walking around the stupa. As we visited other sites around Thimpu, including a massive monument to future Buddha and the fortress of the previous king, it became readily apparent that this was a culture that lived life as it saw fit. It allowed tourists in, not merely as a way to make money, but as a way to show that its a functioning, stable country with plenty to offer. But therein lies the problem with Bhutan; it’s grasping at a past that it may not be able to hold onto. Recognizing this, in 2007, the then king (the father of the current king) abdicated the throne and announced that Bhutan was moving from a pure monarchy to a parliamentary monarchy. Elections were held a few years later and a Prime Minister was voted on to run the government, separate from the king. This act was met with mixed opinions; many in the country welcomed democracy, but a sizable portion wanted the king to retain absolute power.

Thats’s the conundrum of Bhutan: how do you bring a culture so proud of its traditions into a modern society? Is it even possible? Does modernization inherently mean a loss of traditional culture? Or is there way to integrate technology and modern customs into the country without losing what makes Bhutan, Bhutan?

It’s a challenge that is currently facing the country. The king ostensibly recognized that a functioning Bhutan needs to begin to modernize with the rest of the world. It was that foresight that gives this nation a fighting chance to keep its culture while it integrates the luxuries of modern life.

We were not allowed to visit the temple of Gyengen, no foreigners are. The temple features a stone that is sinking, or in the Bhutanese language “Thim”. The sinking of this stone is where the city gets its name. When the stone sinks all the way into ground, the world will end. 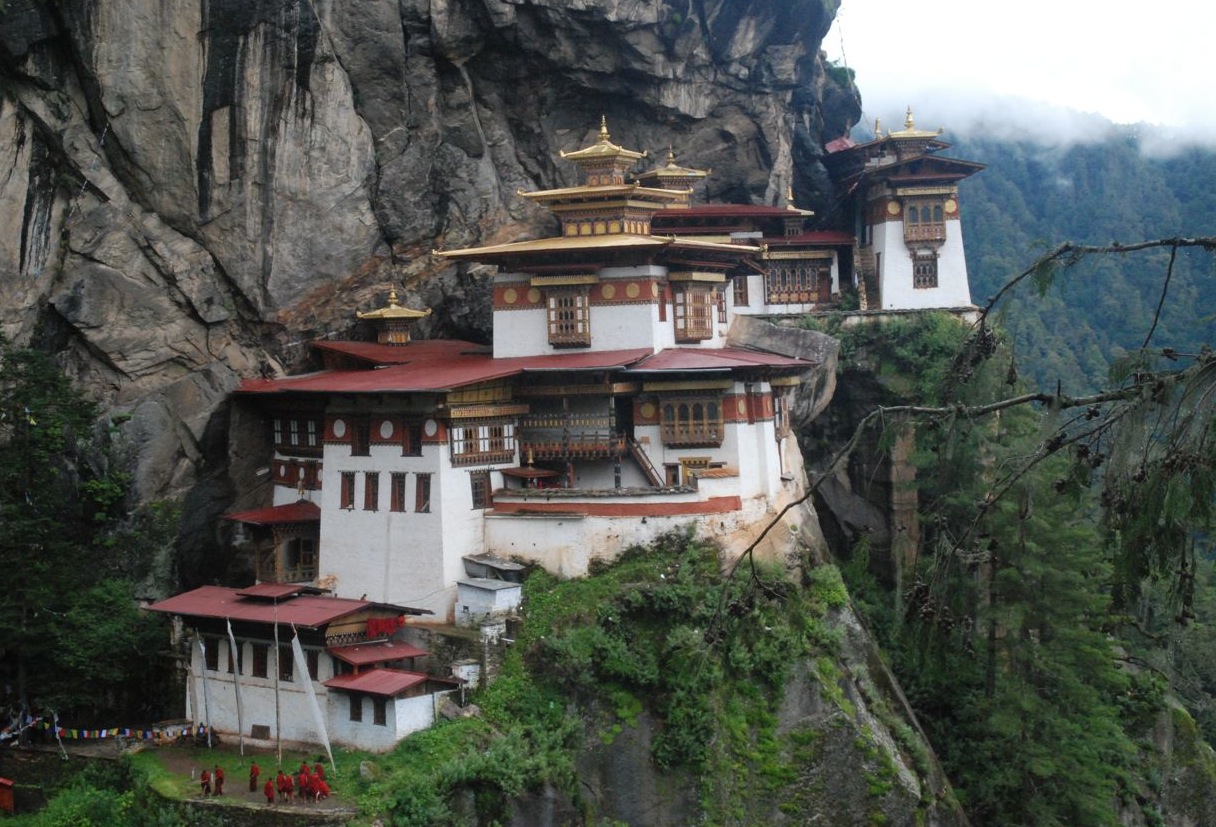 Since reading Eric Weiner’s The Geography of Bliss, I have been captivated with the idea of visiting Bhutan.  This mystical, magical, and elusive country slightly east of Nepal, and bordered by India and China, seems like the last place one would go to seek out happiness.  Yet as a matter of public policy, it is the only country that I am aware of that has a ministry of happiness; and seeks to measure the net worth of the nation not through gross domestic product, but through a measure of GNH.  (Yep, thats Gross National Happiness.)

But is all well in Shangria-la? (Bhutan’s ‘gross national happiness’ masks problems, says new prime minister)  We have just completed our travels there and will be writing our experience soon.  Check back soon for our trip report.  In the meantime, why don’t you visit our Travel Tracking Map at http://leapforwardtravel.com/atw2014.