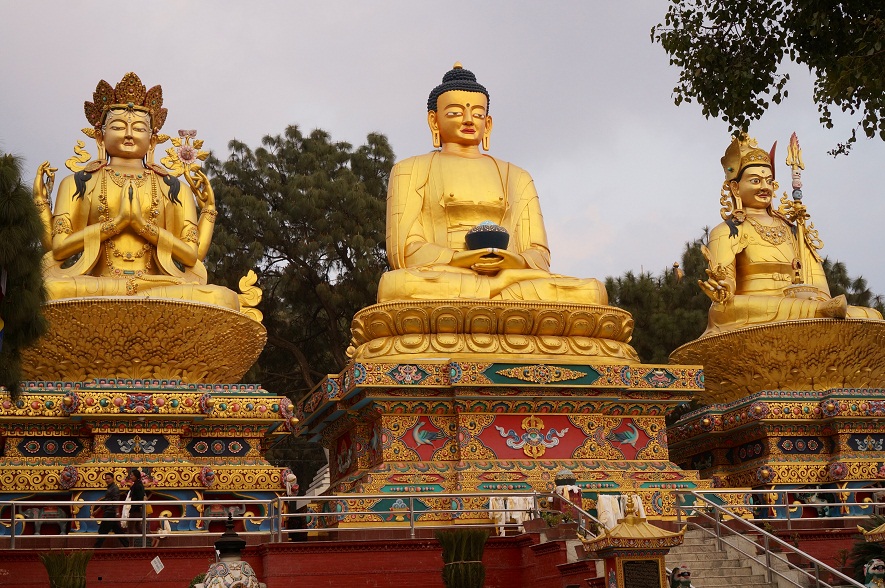 I’m getting fairly used to life in the air. I stay on the ground for a couple of days, then I head to an airport, hop on a plane and spend the next half day or so flying to somewhere new. One of the best decisions Mike and I made, was spending a few more points to fly business class. Forgetting the delicious food and the great service, having the seats that lie flat are no doubt the difference between a trip in which I’m constantly exhausted and a trip that I arrive to a destination refreshed.

So when I arrived in Kathmandu, after visiting three cities in two days, I was a bit more prepared to go out and see the city than I normally would be. Which is a good thing, because from the moment I stepped off the plane, it was a totally different experience than Seoul. Instead of your typical walkway from the gate to the plane that’s totally covered and connects directly, I got the experience similar to the smaller airports in the U.S., stepping directly down onto the runway.

But before I realized the smallness of the airport, in contrast, the first thing that was immediately obvious about Kathmandu is its size. It’s huge. I’m talking big-city USA big. On approach, as far as I could see were houses and buildings. No skyscrapers, no obvious monuments, just miles and miles of houses. Any notion I had about Kathmandu being a small city was quickly dispelled.

After the obligatory trip through customs, Mike and I arrived outside to a huge “Jordan Wadlington” sign. (One thing our leaders have yet to explore as a unifying world-peace option: misspelling my name.) Our driver, Dorje, co-owned the hotel we were staying at for the night, with his brother Ram.

The Stupa House is a fairly new hotel in Kathmandu terms; Dorje and Ram had opened it almost six months ago. It far exceeded any expectation I had. While the space itself is not big, we ascended a marble staircase to check into our rooms and were greeted by a staff that donned Mike and I with the traditional Nepalese welcome of a scarf and flowers. What it lacked in size, it more than made up for in service. We were escorted to our rooms; a row of three twin beds with a small bathroom appended to the side. We quickly unpacked and came downstairs. Dorje had offered to take us around town in the waning hours of daylight. In movies, I’d often seen Buddhist temples and monks, but as someone with roots firmly in western culture, I always considered them to be more of a creation of Hollywood than of real life. That couldn’t be further from the truth. The first stop Dorje took us to was Swoyambhunath Stupa, or what’s commonly referred to as the monkey temple; a place of worship situated high on a hill that overlooks all of Kathmandu. As may be expected from the name, the whole area is covered with monkeys that roam freely among the people. Mike and I ascended the steep staircase to the top, where we were witnessed the sun set over Kathmandu through a collage of colorful buildings and even more colorful prayer flags. The tour of Kathmandu continued similarly to this. We made several stops at other temples and monuments. Each with a unique blend of Buddhist architecture and worshippers. As night fell, we walked around one of these temples, observing the constant liturgy of worship that the Buddhist monks and Nepalese people offered to their gods. As Mike and I made our way through the city, the incredible sights and architecture were enough to satisfy on many levels, but unfortunately there were other aspects to consider. I mentioned earlier that the first thing I noticed when arriving into Kathmandu was the size of the city. The second thing was a thick layer of smog encompassing everything as far as the eye could see. When you get into the heart of Kathmandu, it’s readily apparent why: cars, motorcycles, and mopeds engulf every street with no care paid to traffic direction or right-of-way. Thick billows of black smoke rose from the exhaust of every car on the road, intermingling as the large, dark could rose to the sky. Most of the people walked around the city with masks or scarves over their mouth and nose. Those that didn’t, suffered the consequences of fits of coughing or red, wet eyes.

In addition, because of the lax customs laws and the inexpensive entry fees, Kathmandu was filled with all people imaginable. Every backpacker from Europe or the U.S. had seemed to make their home in Kathmandu. The streets were lined with the faces of those who had been born in the west, but came to the east. Smartly, but culturally unfortunate, the Nepalese seemed to adapt to this situation. Shops and markets had conformed to these type of people, offering cheap goods that were clearly not made in Nepal. This culminated in a situation that seemed to thrive off of people who were in the country to live as cheaply as possible, which, in turn, forced the Nepalese into catering to this group.

It made for an interesting dichotomy. As we strolled back to the hotel, we passed thousand year-old Buddhist temples, and street vendors selling $3 chicken and fries; backpackers who had just entered the country, and Nepalese trying to sell them magical stones. It made for an incredible, but semi-depressing sight.

But through it all, it was evident that Nepal was a country worth visiting. I’m glad I saw Kathmandu and I don’t regret the time I spent there, but any future trip to Nepal will be to see other areas besides its capital. The next stop on the itinerary is Bhutan, a country that most people have never given a second (or probably a first) thought. I’m hoping for the beauty of traditional Kathmandu, without the desperation of its current state.