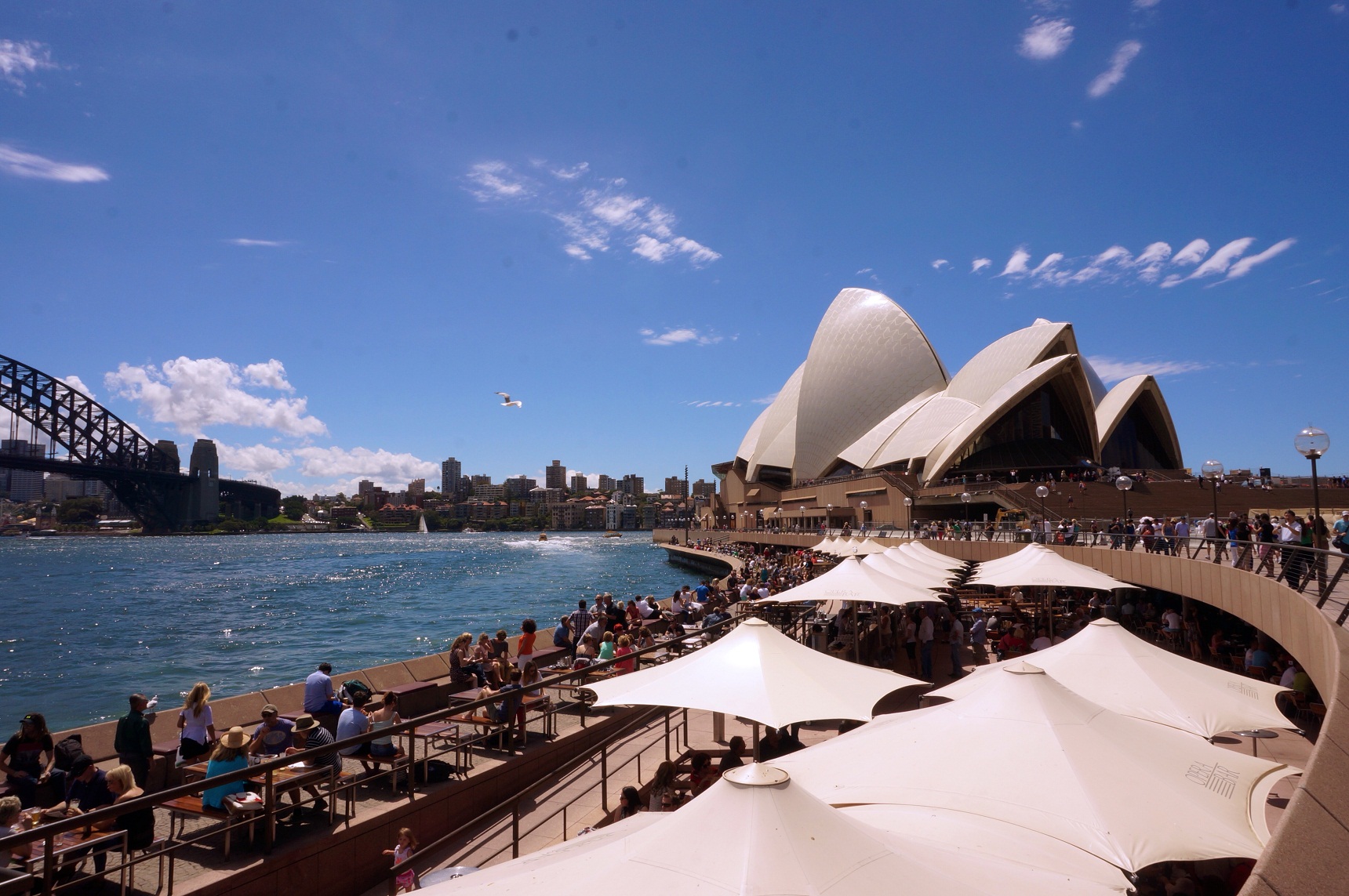 After spending time driving through the countryside of New Zealand, being back in a bigger city was a welcome change of pace. What’s not welcome is the amount of time we’re spending in Sydney: 39 hours. That makes for not only a whirlwind trip of one of the most sought-after destinations in the world, but it also means we’ll be back in the air sooner rather than later.

Sydney actually starts a swing of four cities in three days: Sydney, Seoul, Kathmandu, and Paro (Bhutan). It’s one of the more brutal parts of the trip. Not only will we be spending more time in the air than on the ground, but I also just had the realization that the first time I’ll sleep in the same bed on this trip will be in Tehran; well over the halfway point for things. So with that in mind, I really wanted to see as much of Sydney as I could, but also need to make sure that I’m getting plenty of rest. Spending only 39 hours in a city that’s renowned for their bars and restaurants is unfortunately not very conducive to that.

Leaving from Wellington was interesting. Its runway is one of the shortest in the world. Couple that with near-constant high winds coming around the mountains, taking off from Wellington (so I’ve been told) is always quite an experience. Today was relatively tame, we hit some turbulence while ascending, but according to the people around us, it was one of the better experiences. The flight to Sydney was further than I thought (about four hours), but we arrived safely into the city and needed to make our way to our hotel.

Getting into Sydney was a breeze. The train system from my short experience is fantastic; it runs often, it’s spotless, and it gets you right where you need to go within about twenty minutes. From the station, it was a short walk to one of the most-talked about properties in the world: the Park Hyatt Sydney.

The hotel itself is very good, but the views are out of this world. Mike should be writing up a fuller review of it, but, spoiler: we weren’t disappointed. The whole experience is centered on the view of the harbor and the Sydney Opera House. The hotel itself wraps around the pier, ensuring that as many people as possible have the best scenic outlook. We booked the property using one of the two free nights in a suite I received from being a diamond member and getting the Chase Hyatt credit card. After some initial confusion with the room, we spent some time getting our bearings and enjoying the view before heading out into the city. With the Park Hyatt located right on the harbor, several of the best restaurants and bars sprung up within walking distance of the hotel. We spent the first evening jumping from bar to restaurant back to bar, eating and drinking our way through the city.

After a late night, an early morning. It always seems to work that way, doesn’t it? But at least this time it was an early morning of our choosing. With my Hyatt platinum status, we didn’t have to check out of the hotel until 2pm. It gave us a bit more time to get some things done in the morning before heading out to the see the city. I’d been neglecting writing because, well, I was actually seeing the things I was going to write about. But there’s not much more of an inspiration than sitting on the balcony of your hotel room staring out at the Sydney Harbor and watching the locals and the tourists mill around while writing about it. Of course, they’d probably all be flabbergasted to know I was writing about New Zealand while staring at their beautiful scenery. Getting some much-needed work done only lasted a few hours before the sun rose high enough in the sky to let us know we needed to get outside. My favorite part of the year at home is the fall and Sydney is right on the cusp of it. It’s comforting that the smell in the air matches so closely to what I’m used to. The oppressive heat of summer was still hanging in the air, looming over us, but never quite materialized. It was warm, but not hot.

We left the hotel and made it over to the Sydney Opera House; we’d been staring at it for the past few hours, but we were finally going to see it up close. We skipped the tour and instead chatted up a guide that was waiting for his next group. He let us know that if we went a certain way, we could wander around and not have to join up with an official tour. The opera house itself was amazing, but even more stunning were the views of the city from it. We’d spent so much time from the Park Hyatt looking at the opera house, that we hadn’t even stopped to consider that the views may be just as great from the other side. After about an hour of walking around, we headed back to the hotel, grabbed our bags and moved to the Westin. While the Park Hyatt was fantastic in all the ways you needed, we wanted to move to a different part of the city. We weren’t disappointed. Mike left to stroll around Hyde Park (Sydney’s equivalent of Central Park) and I was off to the Apple Store. 1 One free iPad and one walk later, Mike and I met up to head down to one of the (many) zoos in the city.

Because of the short amount of time we had, we decided to focus on one of the smaller zoos, but one with only Australian animals. We walked about seeing everything from Kangaroos and Koalas to crocodiles and giant bats. The highlight was no doubt the kangaroo walk, where the keepers allowed us to get within a couple of feet of all the marsupials at the zoo. After the previous night and after the long day, we had a quick dinner down by the harbor and a couple of beers at a Mexican tequila bar. We made our way back to the Westin to call it an early night.

The biggest obstacle to almost any trip is time. Whether you have too little (or too much), you have to learn to fit the experiences you want to have into the time you have available to you. I could have spent several days in Sydney: properly seeing the sights, properly eating at the restaurants. But, with only 39 hours, we were forced to pick and choose. Instead of rushing from one place to another– looking at everything, but seeing nothing– we decided to see what we could, but take a more leisurely pace. We didn’t see as much, but it led to a more enjoyable experience.

Now it’s back in the air to Seoul for the second time. This stop is for 16 hours. That will give me enough time to see something, rather than nothing (as happened last time), but it’s nowhere near enough to do what I need to do. The bottom line is I have to get used to this. The leisurely start to this trip is behind us. The next two week we’ll be jumping from place to place much more quickly than before. That’s not necessarily a bad thing, just different.